PRESERVING SAFE, STABLE HOMES
Welcome - This blog was created to discuss the common questions and topics concerning the start-up and ongoing operations of A Brush with Kindness and Aging in Place

As veterans return from Iraq and Afghanistan, attention is increasingly focused on ways to honor them and support their transition back home, especially given the current economic circumstances that limit job opportunities and reduce the availability of affordable housing.


The total veteran population in Minnesota is currently more than 410,000 at least 23,000 of whom have served since 9/11. These numbers are expected to grow significantly with a planned military draw down. Understanding that many veterans experience their greatest periods of crisis immediately upon returning and five to seven years after leaving active duty, the immediate demand for Habitat products and services from the veteran community is strong and likely to spike over the next ten to fifteen years.

Veterans throughout the U.S. have been particularly hard hit by the housing crisis and economic recession. More than 72,000 veterans currently spend at least half of their monthly income on rent, meeting the housing need requirement for Habitat partnership. Additionally, returning veterans often struggle with personal finances.

Veterans do not think of themselves as heroes, no matter how extraordinary their skills, courage, or actions may be. Their heroes are the ones still over there or coming home in a flag-draped boxes;
Veterans often want to go back to the war zone. Sometimes it’s because they feel called to go in to finish the mission or support their buddies, sometimes it’s because they feel they can no longer fit in to American society and its frivolous interests and fads.

There is nothing black-and-white about what has happened to them. Almost always, there are good things that come from serving. Likewise, there are some pretty difficult things that they face once they are back home. Do not make any assumptions about their experiences; They are not the same people they were before they served. But do not assume that is a bad thing. The Service Member may come home more confident, with better problem-solving skills. He may return with a deeper sense of gratitude for the comforts that He used to take for granted or she may have found a greater sense of purpose and direction than she ever had before. Yes, there may be many unseen wounds of the soul and spirit.

Though hundreds of organizations, including some with a focus on housing, seek to engage veterans and their families, overwhelming need still exists.  According to a survey conducted by Civic Enterprises in 2009, only 13 percent of veterans claim that their transition back to civilian life is going well. Fewer than 10 percent agree that their families’ needs are being met. The approach to veterans’ social reintegration must be holistic and combine the efforts of government, the public sector and the private sector.


In addition to offering the benefits of its housing model, Habitat is also uniquely positioned to meet broader reintegration needs of service members transitioning back into civilian life.  According to Civic Enterprise’s study “All Volunteer Force: From Military to Civilian Service,” civic engagement and volunteerism are very effective means to achieve successful social and community reintegration.

Veterans are eager to serve in and have much to offer to their home communities. Ninety percent of surveyed veterans agree that service is a basic responsibility of each American citizen. In addition, veterans are particularly interested in volunteer activities that support other veterans. Almost every veteran (95 percent) indicated a desire to serve wounded veterans. The challenge is to effectively marshal the right mix of support and opportunity in a way that honors and respects the sacrifice of military families and values their return to civilian life.

Greg is a veteran of 2 tours in Iraq. He is married with ... Greg has been in the Minnesota National Guard for nine years as a heavy construction equipment mechanic. Upon his second return from Iraq, Greg was diagnosed with cancer. With his current condition, Greg was having problems taking care of his house. To make matters worse, a woodpecker had been pecking holes all over the siding for months. After taking care of his house, his family and his country for years, Greg learned that he might need a little help himself.

Lieutenant Geraldine Longfellow, a former member of Greg’s brigade, heard about A Brush with Kindness and recommended Greg for the project. Not only was he chosen for the project, but members of Greg’s unit came out to help fix his house. “It was easy to ask his brothers and sisters to help repair his house,” said Lieutenant Longfellow.

Members of Greg’s unit and A Brush with Kindness headed to his house in Coon Rapids, MN. Once there, they realized that the project was bigger than they expected. The woodpecker had basically put holes in six inch increments on the sides of the house. That didn’t matter to the crew though. In a project that lasted two days, all of Greg’s old siding was replaced by new siding. Greg even helped out where he could. “It’s hard to sit and not do anything,” Greg said.

Greg is thankful that his house was chosen for this program: “I want to stay in this house for as long as possible!” Unfortunately, in 2011 Greg lost his battle with cancer but now his family has one less struggle to overcome because Greg left them with a safe, decent home. 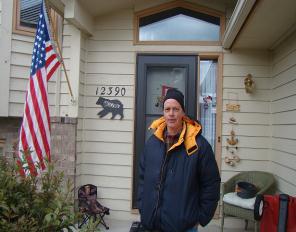 ABWK in the Twin Cities, MN

A Taste of ABWK from around the U.S.

The following site may provide additional assistance to struggling families.

It is important to find messages that comunicate the essence of your new program. The public will pick up on those messages that connect with their values. We have used "Ever have a brush with kindness?" and "Connecting people... Restoring homes" as well as key quotes and scripture that resonate with our constituents. Check out the slide show below to see quotes that have inspired our messaging.

A Brush with Kindness

Pat Lund
I founded A Brush with Kindness 25 years ago. With tremendous support from the Valspar corporation, we created a program that helped preserve homeownership throughout the Minneapolis/St. Paul metro area so that families could continue to live in a safe, healthy home. I have helped to start over 100 programs throughout the US and in several countries as a consultant with HFHI. I currently direct the Age Well at Home. We modify the homes of older adults so they cam remain healthy and safe in the homes they love. Feel free to contact me for more information at plund@abwk.net.